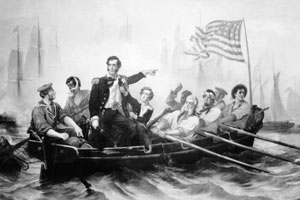 Oliver Hazard Perry was born in 1785 in Rhode Island. He joined the US Navy as a midshipman at the age of 14 and by the age of 20, Perry was made a lieutenant. He was promoted to Master-Commandant just one month before the United States declared war on Great Britain.

At the beginning of the War of 1812, Perry was sent to Erie, Pennsylvania to oversee the building of a small fleet. This fleet included the ships U.S.S Lawrence and U.S.S Niagara. On September 10th, 1813, Perry's squadron fought a British regiment commanded by Captain Robert Barclay. The British destroyed the Lawrence, so Perry took the ship's flag and sailed for the Niagara. Within 15 minutes... Read More